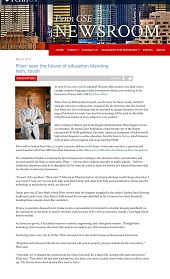 In 1975, if you were a newly admitted Wharton MBA student who didn’t know enough computer language to take introductory classes, you wound up in the basement of Vance Hall, with Paul Zane Pilzer.

Pilzer, then an MBA student himself, was the tutor for these “mostly terrified” students who were working with a computer for the first time. But they learned. And Pilzer saw how technology had the potential to change education. On the first page of his thesis, he wrote “one day this technology will be used to affordably bring the best teacher of every subject to every student.”

After working in finance and in the Reagan administration, Pilzer began to focus on education. He started Zane Publishing, which became one of the largest educational CD-ROM publishers, then later American Academies, which re-enroll high school dropouts in online education. Now his focus is Zaniac, which features both an after-school program and camp teaching STEM.

Pilzer will be back at Penn May 11, to give a keynote address on the future of education and have a question and answer session with Penn GSE Dean Pam Grossman at the Milken-Penn GSE Education Business Plan Competition.

The competition finalists are among the best entrepreneurs working in the education today, and educators and investors attend the finals to trade ideas. Pilzer — who has three children currently in public schools — believes traditional education needs to be disrupted. But he wants he wants to share the lessons he’s learned from more than two decades in education businesses.

“I’m part of the problem,” Pilzer said. “I believed at Wharton back in 1975 that technology would change education. I was wrong. I went way too into tech. Kids need interactivity with other kids. Kids need socialization. Zaniac uses the technology to maximize the touch, not the tech.”

Zaniac grew out of Zane Math, which Pilzer created after his daughter struggled in the subject. Rather than following traditional grade levels, Zane Math is built around 80 concepts identified in the Common Core State Standards, breaking these concepts down like vocabulary.

From a 30-question diagnostic test, Zaniac creates a personalized curriculum for a student focusing specifically on the concepts he or she needs to master. Students work in teams of five with an instructor, usually a local high school honors student.

As Zaniac has grown, it has added courses in robotics, engineering, and video game creation.  Through these technology-driven lessons, they learn they need to use math to give their creations functionality.

Technology plays a key role in all this, Pilzer stressed, but it only works because of the personal interaction.

“Programs and businesses like this are what America will need to properly prepare students for the 21st century,” Pilzer said.

“Overnight, we’ve changed the requirements for what a kid needs for a happy life, starting with math and science,” Pilzer said. “They didn’t fail and start teaching less. You learn a lot more in public school today than you did 50 years ago. The bar has been raised in what they need to learn.”