Home » Media » Articles » Go Out and Improve the World!

Go Out and Improve the World! 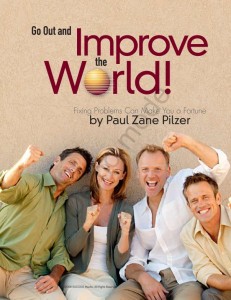 Just pick up any newspapers or watch any news program and you will see how many problems needs to be solved. Take the energy crisis for example. Not only is it saddling businesses such as the airlines and freight industries, but those higher costs are being passed on to consumers through higher food costs and $4-a-gallon gas at the pump.

Many people are looking to Washington for answers, but I’m here to tell you, if we wait for the politicians to solve the problems of our day, we will be waiting a long time. The problem does not lie in a lack of resources or physical and human capabilities – we’ve always had plenty of both. Our past and future success lies in human ingenuity.

America has seen perilous times before. During World War II, when resources were in short supply, we banded together and came up with solutions to support the war effort. When we were cut off from Malaysia, the largest producer of natural rubber, our scientists came up with synthetic rubber that was used to move our Jeeps and trucks. Polio, one of the most dreaded diseases of the 20th century, crippled thousands of people – until meetings its match in Jonas Salk. The American microbiologist came up with the first vaccine to fight the disease, and today polio has been largely eradicated.

These are just a few of the many stories of people who have improved the world for the better – people who embody the entrepreneurial spirit. Entrepreneurs, by their nature, see not only problems but solutions and opportunities. And, in this article, I’d like to take the opportunity to encourage budding entrepreneurs with some advice. I’d like to propel them to become leaders in their fields – to go out and change the world!

1. Learn then earn. Be pulled, not pushed.

Becoming a successful entrepreneur starts with accumulating knowledge about many topics. First, you have to work on what I call your generic skills: reading, writing and basic math. If you cannot communicate effectively with people, you are in trouble.

Second, pick an industry, focus on it and master it. As your knowledge accumulates, your functional skills will improve. Along the way, you will build your network. And when you are recognized in your industry as someone who is good at what they do, that is the time to leave. Most people unfortunately go out on their own when they are pushed out. Big mistake. The time to leave is when you are being pulled by the entrepreneurial spirit.

For example, I worked for Citibank in the late ’70s and after completing several successful financial deals, I soon began receiving offers from headhunters for other positions in my industry. These headhunters were calling me because I was building a solid reputation for expertise. If you are good, they will find you, too.

The Law of Frequency

Business consultants are paid a lot of money for what they supposedly “know”. They are hired because of their esteemed resumes and knowledge of how to make companies money. I went to Wharton Business School to learn how to “know” why some financial deals work and why others don’t. But then I learned about the law of frequency. I played the numbers and came up with the conclusion that you don’t always know what’s going to happen. It’s trial and error.

Each year on the first day of class I taught at the New York University, I would make smart – and somewhat arrogant – graduate students spend half an hour flipping coins. I would tell them to flip the coin 10 times and then go to the board and record how many times the coin landed on heads or tails. Most people think it’s going to be an even 5-5 split. It’s not. Flip it 100 times it’s almost always 51 to 49 heads because of frequency. It’s a great exercise that teaches that you just can’t go into business and complete two transactions a year and say, “OK, this doesn’t work” if you are not  successful, or “I’m brilliant” if you are successful. You’ve got to understand frequency.

At 17, I discovered the secret that I now whisper in the ears of my students: There are 168 hours in a week. When you ask people how many hours are in a week, most people think 40 hours, because they are programmed to think in work-week terms. Even most online calendars work in daily eight-hour increments.

During my freshman year in college i was majoring in engineering, science, and physics. The first two weeks I was blown away. I met so many kids with 1,600 SAT scores. I even met people who could beat me at chess, which made me mad because I was a top New York chess champion in high school. I thought I didn’t stand a chance. I lost my direction, and in my first semester I got a 1.8 grade point average.

This put me on on academic probation, and I was told I would have to pass eight classes during the next semester. If I didn’t, with my low draft number, 3, I would go straight to Vietnam. So I came back from semester break very motivated and signed up for eight classes.

I opened the calendar and started scheduling my time carefully to make sure I got in the required study time. And then I realized there are 168 hours in a week. Once I threw out my social calendar, I discovered what college students don’t realize – even most businessmen don’t know – just how many hours we have in a week to get things done. So what happened? I finished all eight classes, received an A in five and passed the others, which were scored pass/fail. The next semester, I took 10 classes and got straight A’s. I graduated in 2 1/2 years and went straight to Wharton School of Business at 19.

Thomas Edison said success is 99 percent perspiration and 1 percent inspiration. Don’t waste these 168 hours, schedule them. Today I still schedule my time intensely, but mostly for my kids. All my children have calendars, and they love the structure in their lives.

3. Get rich by solving problems.

When most people are unhappy customers, they get mad; I try to get rich. All of my businesses started the same way: I got rich by improving the world and making a lot of people happier in the process.

Restaurants are my favorite example lately. I joke that the working title for my next book is 100 Businesses I wish I had Started, So Someone Please Start Them. It amazes me that here we are in 2008 and yet tonight I will go out to dinner and I will sit at a restaurant with half its 100 seats empty. Then I will go to another restaurant with all seats filled and a waiting list. And at the restaurant with the empty tables there is a waitress who is probably a single mom who needs those tips. And there are probably several families who don’t want to make dinner, but also don’t want to waste the time waiting 30 minutes for a table at a restaurant.

I’m amazed that restaurants haven’t taken a page from the airline industry by building a computer system or Web site that can detect these empty seats. It would be as easy as setting up a text-messaging system that could send people information about the number of open seats.

I was working with American Airlines and Sabre in Dallas in the early 1980s when they learned how to fill every airline seat. And the answer was pure mathematics. Now grandma, who wants to visit her grandchild, can’t afford $300 for a flight but for $122 she’ll take it even if she has to fly through three cities to get to her destination. A small price to pay to see her precious grandkids.

Every day of my life I see examples like the restaurant and I think, why hasn’t some entrepreneur fixed this? And today that’s probably what I do best: stimulating entrepreneurs to go and fix problems. And, ultimately, the American way is about service – serving each other.

One of the most exciting experiences in my life is teaching. I became an adjunct professor at New York University in 1979.

I would do case studies on topics such as Trump Tower and have students role-play – with Donald Trump sitting in the back of class wearing a hat. In those days he wasn’t a celebrity; he was just a successful real estate developer. And the students would be terrified when he would stand up and say, “I am the real Donald Trump and if I did it the way you were talking about, I would be broke.”

But frankly, I got at least as much out of the class as the students. I learned from the older students that they were impressed with the position I had in the Reagan Administration. But the freshmen weren’t so impressed. They didn’t want to work in the White House; they wanted to become the president.

I realized that, when you’re 18, your world is wide open. But as each year passes, one more nail goes into the coffin, killing your dreams and your aspirations. And by the time you reach 25, you’ve been beaten down and become a realist. And my advice is you can’t let these things get you down.

In 1995, when the first Jewish temple opened in Park City, Utah, I had the opportunity to counsel about six to eight kids a year through high school to get into college. And after meeting these kids, the first thing I would have to do is get rid of some of the stuff some other teachers taught them – that they can’t do math well or write well, or that it’s not realistic to think they can become president or cure cancer. I have continued this practice and to date have mentored dozens of students for admission into top universities.

But these young students still have energy, and it’s infectious. I need their energy, their excitement – and I get it from my high school students who are really bright and talented and who haven’t gotten slapped around. I want to teach them to deal with the slaps. I want them to rebel against rejection. By the time some of these kids reach 16 and 17, they become afraid to open their mouths and say they want to cure cancer or polio. I want to teach them they can do anything they want. It’s up to them to go out and improve the world.

4. Notice what could be better and do something about it.

How many times do you get put on hold when you call a company’s customer service line? I call the 1-800 number every morning because I want to stay close to the customer experience. If I see areas for improvement, I’ll record all the information and give it to my directors. And if it doesn’t change in a couple of months, I send letters to the directors saying we need to find the person in the company who got my letter three months ago and ask why the problem hasn’t been fixed. America deserves no less. Companies become rich because they find a way to serve others better. And if someone at your company is not serving your customers, it hurts more than your company; it hurts America.

We can’t be just consumers – we have to keep our eyes open and our entrepreneurial instincts honed. We have to take responsibility for making the world a better place. And when we do, we’ll create our own opportunities.