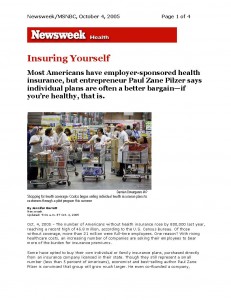 Insuring Yourself – Most Americans have employer – sponsored health insurance, but entrepreneur Paul Zane Pilzer says individual plans are often a better bargain-if you’re healthy, that is.

The number of Americans without health insurance rose by 800,000 last year, reaching a record high of 45.8 million, according to the U.S. Census Bureau. Of those without coverage, more than 21 million were full-time employees. One reason? With rising healthcare costs, an increasing number of companies are asking their employees to bear more of the burden for insurance premiums.

Some have opted to buy their own individual or family insurance plans, purchased directly from an insurance company licensed in their state. Though they still represent a small number (less than 5 percent of Americans), economist and best-selling author Paul Zane Pilzer is convinced that group will grow much larger. He even co-founded a company, Extended Benefits Group, that provides individual health benefits to employees of Fortune 500 companies. In his latest book, “The New Health Insurance Solution,” published in September by John Wiley & Sons, Pilzer argues (not surprisingly) that most Americans—at least, those without pre-existing conditions—can save money by choosing individual policies over those offered by their employers. (With the exception, he notes, of residents in New York, New Jersey, Massachusetts, Maine and Vermont. Those states mandate that insurance carriers accept all applicants, so insurers either don’t offer individual plans there or charge much higher premiums there than in other states.) Pilzer elaborated in an interview with NEWSWEEK’s Jennifer Barrett. 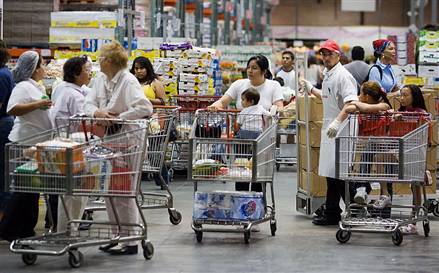 NEWSWEEK: You write that you learned about individual insurance in 1999 when your wife was pregnant and you lost your employer-sponsored insurance. What happened?

Paul Zane Pilzer: Technically, I was on a healthcare plan that I shouldn’t have been on. I was a board member of a company and I got it through them. I read it carefully to make sure I was absolutely truthful … These are normal things for entrepreneurs to deal with. But when [the company realized it] I was dropped. It’s funny to think that here I was, a successful guy, and I was sneaking around to get health insurance.

NEWSWEEK:  So what did you?

Paul Zane Pilzer: I panicked. And I started calculating how much it could cost if we had a pre-term baby. We didn’t have one, but that’s the way I think. I could afford it but it would have been a lot of money. I didn’t realize then that Utah [where we live] is a really good state for health insurance … But I did some research and not only did I get health insurance, I got real health insurance. Corporate health insurance is not insurance, really, but a pass-through mechanism. If you quit your job or get fired, you lose that insurance. They should really be called health benefits because there is no insurance if you lose your job. In contrast, there’s the individual market, which is new because states have now liberalized the laws. The rate [on your premium] can never be increased for health reasons now, only by inflation, nor can a policy be cancelled. It is guaranteed renewable.

NEWSWEEK: I’m assuming that’s what you have now.

Paul Zane Pilzer: Yes, I purchased a $20 co-pay policy—no matter what happens. I pay $5 for generic drugs and 75 percent off of brand name medications. I’m nearly 52 with four kids aged 5, 3, 2 and 1. I have a typically expensive healthcare family. And I pay $433 a month for a family of six.

Paul Zane Pilzer: I actually shouldn’t even have this one. I should have a high deductible policy [which would have an even lower monthly premium]. But my wife said she didn’t want to think about how much to pay [for each doctor’s visit]. The $433-a-month policy is actually about average. Utah is good for insurance … but California is the best.

Paul Zane Pilzer: Because it’s effectively free market health insurance. There are 22 carriers competing for your business. So if you have a smoking problem or anything, you can always find someone to take you.

NEWSWEEK: But at what cost?

Paul Zane Pilzer: Premiums have already come out now for 2006, so we know that in 2006 the average corporate health insurance plan for a family of four is $14,000 a year, and it’s $4,500 a year for an individual. That is the cost the company pays, of which an employee may share part of. So let’s assume you work in California and your employer pays $14,000 for you. If you went to the same insurance carrier yourself and asked if you could get a policy that had identical benefits [to the employer-sponsored plan], they would charge you $7,000 [which your employer could reimburse you for.

Paul Zane Pilzer: Because you are in the 90 percent of the population that is healthy. The average [healthcare] expenditures for an American are $6,600 a year. Ninety percent of the people spend less than $1,000, but 10 percent use more than $40,000 a year. In the old days, we didn’t know who was healthy or not. The thinking was that anyone could get cancer or other diseases, so let’s bond together and insure each other. But crank the clock forward 20 years and I can predict with 99-percent accuracy what you will spend next year. And a carrier can check with the Medical Information Bureau, which has your whole file. So if you’re healthy, the [insurance company] would charge you $7,000 for what they charge the company $14,000 because under their policy with your company, they have to cover whoever is in the company. But if they could choose to only cover the 90 percent, they would charge them less.

NEWSWEEK: What happens to the other 10 percent?

Paul Zane Pilzer: Two big things have happened that exploded the popularity of individual health insurance policies. One is that companies are allowed to pay for individual policies now and can reimburse employees tax free. And, starting in 2005, states are now required [by Congress to have state guaranteed coverage.

NEWSWEEK: For that 10 percent with health problems?

Paul Zane Pilzer: Yes, we’ve always had it for old people with Medicare, and for poor people with Medicaid … But this is not for poor people but middle class and upper class people who have been rejected for an individual policy or have had their policy rate [premium] upgraded because of a health problem—or they have a letter saying one of those two things would happen if they applied. That makes them eligible for state guaranteed coverage.

NEWSWEEK: Won’t it be much more expensive?

Paul Zane Pilzer: It is the identical coverage but two to three times the [average premium price] in the state. Some states are better and some are worse … But healthy family members could get individual coverage then get the unhealthy person guaranteed coverage. So you can lock in a lower rate for the other family members who are healthy.

NEWSWEEK: I’d never heard of the guaranteed state coverage. Are many people enrolling in it?

Paul Zane Pilzer: About 250,000 families as of April 2005 had state guaranteed coverage (or about 1 million people). But most were for the whole family instead of for an individual member. And I did research and found that they were all upscale for the most part. Many of them had used their connections, whined and complained about their child and gotten into the state-covered insurance. But they didn’t realize it was there for anyone. The state guaranteed coverage doesn’t advertise.

Paul Zane Pilzer: I realized that when I interviewed an administrator who said, “Are you going to write about this? If you write about this all these kids who have cancer and diabetes are going to call us and we can’t handle them all.”

NEWSWEEK: Let’s get back to individual health insurance policies. You say they’re better, cheaper and safer for most people than going through an employer. Why?

Paul Zane Pilzer: You can keep the insurance as long as you pay the premium. You don’t lose it if you lose your job. It’s permanent—meaning the price can’t go up for illness. Individual policies offer the same benefits [as employer-sponsored plans] but if you’re in the 90-percent healthy group, you could pay a quarter of the price.

NEWSWEEK: Are there any cases in which an employer-sponsored plan is better?

Paul Zane Pilzer: There are rare cases, but three things must happen: you can’t get individual insurance [you’re in the 10 percent that’s not healthy]; you live in a state that’s terrible for state guaranteed coverage, where it is much more expensive than employer-sponsored coverage; and you are sure that you will work there until some type of permanent insurance kicks in. You’re either in a union or you’re the CEO and you’re near 65 so you know you’ll get Medicare.

NEWSWEEK: Why do so few people purchase individual/family policies?

NEWSWEEK: Yes, but that’s still less than 5 percent of the population.

Paul Zane Pilzer: Most people don’t know it exists … And even if they do know it exists, they don’t realize that it’s often half the price. In fact, most people think it’s twice the price—and it used to be. That’s because years ago, they took everybody. But that’s changed. Also employer group insurance used to be much cheaper. And until 2003, a self-employed person couldn’t take a 100-percent deduction for their healthcare expenditures. Now, as of 2005, all employees also can have a 100-percent deduction.

NEWSWEEK: You write that employer sponsored group health insurance will be “mostly eliminated” in the next 20 years. Why?

Paul Zane Pilzer: About 157 million Americans are on employer plans now. Of that, most of them get employer health insurance and are paying twice as much as they should … But you never learn how to buy insurance here. That’s why I wrote this book. This is not new legislation that we need to pass. I am telling you what has already happened. Most Americans don’t know how to purchase individual policies. But if you’re in California, you’ll see billboards all over [the highway] telling you to call this number to enroll because you’ve got 22 carriers vying for your business. I’m telling you, what is happening in California now will be happening everywhere soon.