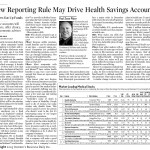 Until recently, investors didn’t have to worry about companies’ health care obligations to workers and retirees.  And before disclosure rules changed a decade ago, it was hard for analysts and investors to even know how much they cost.

The legal change cut the number of retirees with company-sponsored medical coverage.  A decade ago 44% of them had it; less than 20% do today.  And most of that 20% gets insurance only because of their old union-type contracts.

In December 2006, a similar law will make municipal governments tell the public and their bond investors what they’re providing for retiree health care.  This may lead more employers to seek ways to cut costs.

Paul Zane Pilzer, an economist and former Presidential adviser, predicts that consumer-directed health plans linked to health savings accounts (HSAs) will be the solution.  He seems them taking over the health care system in 10 years.

HSAs are high-deductible plans that let employers pay a fixed amount to an employee’s medical care; the worker chooses how to spend that amount.  What the worker doesn’t spend, he keeps.

Critics say these plans will abandon workers who have little expertise to choose the care providers.  And they will force workers to pay more of their medical costs.

IBD: Why should consumers opt to take more control of their medical care?

Pilzer: Because unlike pensions, health benefits can be terminated at any time – (except) union contracts.  Companies are prohibited from eliminating pensions, even if they go through bankruptcy.  Not the case with health benefits.

IBD: Why should investors care and what can they do?

Pilzer: Most companies with union employee contracts like General Motors have retiree health benefits to pay, but I can’t stress enough that these are open-ended obligations.

Who knows what new devices will be invented tomorrow and that you, the investor, will become obligated to pay for?  Our medical industry is constantly defining new diseases that weren’t (considered) diseases a few years ago and coming up with new treatments.

Yesterday’s cause of death is today’s cause of disability.  People used to die of strokes, but today strokes only disable them.  This trend is good if you’re the person who doesn’t want to die, but it’s bankrupting many of our largest and oldest corporations.

I’d encourage every analyst worth his salt to state the retiree health obligation of every company he follows.  Investors need to be as well-versed about a company’s health care obligations as he is about the company’s business.

I’ll take my chances when I invest that a company will make a good widget, but I’d rather not take my chances that a company’s retiree gets cancer.  The auto industry companies with their unionized health benefits are only the tip of the iceberg.  Municipal governments will face a major crisis in December 2006 when the new GAAP (generally-accepted accounting principles) rules come.

IBD: What makes you think that health savings accounts are inevitable?  Most U.S. workers today happily buy low-deductible plans through their employers.

Pilzer: Your older readers will remember that 30 years ago we faced a crisis in life insurance and pensions.  Back then, most corporations had defined-benefit retirement plans.  When you retire–we’ll pay you X dollars for as long as you live, adjusted for cost of living.

Most U.S. companies realized that they would go bankrupt with such a plan.  So they switched from defined-benefit to defined-contribution pensions.  They had no choice.

A similar change is about to take place in health care.  To put it in perspective, growth in health care costs now exceeds profits for any of the Fortune 500 companies.

Today 2 million Americans have health savings accounts.  The law (permitting HSAs) passed in December 2003, but because of the (annual insurance enrollment cycles), HSAs are effectively brand new this year.

IBD: How would health savings accounts impact the medical system?

Pilzer: When consumers spend their own money, their decisions will be more cost conscious.  In 1997, Lasik eye surgery was introduced for $3,000 an eye and was done only in hospitals.  Insurers refused to pay for it.

Now, eight years later, Lasik costs $500 an eye and the procedure is done in strip malls or shopping centers nationwide.  This competition and drop in price also will happen to many other medical products.