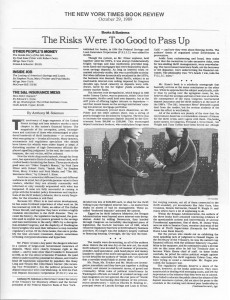 The insolvency of huge segments of the United States savings and loan industry marks a sorry chapter in this nation’s financial history.  The magnitude of the corruption, greed, incompetence and cynicism of those who mismanaged or plundered hundreds of thrift institutions–or covered up what was going on–breaks all records.  Many lawyers, accountants and regulatory specialists who should have blown the whistle were either duped or inept.  A disturbing number of high Government officials displayed appalling judgment.  In the end, the costs to the taxpayer, the real victim, will be colossal.

Now the whole disgraceful episode, though far from over, has spawned a flock of carefully researched, well-crafted books chronicling the fiasco.  Three particularly good ones are “Other People’s Money,” by Paul Zane Pilzer with Robert Deitz; “Inside Job,” by Stephen Pizzo, Mary Fricker and Paul Muolo; and “The S&L Insurance Mess,” by Edward J. Kane.

Each has a somewhat different focus and different audiences in mind, but all provide genuine value to their readers, whether they are already reasonably well informed or only casually acquainted with what has happened.  If none are fully successful in coming to grips with the broadest policy dimensions and implications of the thrift industry debacle, that is surely forgivable, for the situation is still fluid.

Because Mr. Pilzer is in real estate development, he has some firsthand experience of what went on.  He has teamed up with Mr. Deitz, an editor of The Dallas Times Herald, and together they have written a highly readable introduction to the thrift disaster.  They recount the history, the legislative background, the gambits used to exploit new powers granted to the savings and loan institutions in the early 1980’s by a deregulation-minded Congress, and the duplicity of Washington heavyweights who used their influence to stop remedial regulatory action.  Of the three books, this one is probably the best all-around treatment, despite sometimes irritating overgeneralizations and hyperbole.

Mr. Pilzer reveals a key point: the dangers inherent in a system of large-scale Government insurance of deposits.  These were clearly foreseen right at the outset–and by none other than Franklin D. Roosevelt in 1933, as he was about the become President.  He (and others) understood the potential for abuses, and tried to head off legislation supported by populists like Huey Long and Texans like John Nance Garner (the incoming Vice President).  But the political pressures for deposit insurance were overwhelming.  In 1933, the Federal Deposit Insurance Corporation (F.D.I.C.) was established for banks; in 1934, the Federal Savings and Loan Insurance Corporation (F.S.L.I.C.) was added for thrifts.

Through the system, as Mr. Pilzer explains, held together until the 1970’s, it was always fundamentally fragile.  Savings and loan institutions provided long-term fixed-rate mortgages that were financed by short-term savings deposits.  As long as interest rates remained relatively stable, this was a profitable activity.  But when inflation dramatically escalated in the 1970’s, the business was doomed.  Many thrifts, subject to an inadvisable interest-rate ceiling imposed by Congress decades ago, faced calamity as deposits were withdrawn, lured by the far higher yields available on money market funds.
But interest rate deregulation, which began in 1980 under Jimmy Carter, was no panacea, either.  Once free to compete, thrifts could hold onto deposits, but at the stiff price of offering higher interest to depositors–and that meant losses on the savings institutions’ existing low-interest mortgage portfolios.

What ultimately proved more disastrous, as Mr. Pilzer and the other authors show, was a string of poorly thought-out decisions by Congress.  The first was to increase the maximum deposit insured by the Government from $40,000 to $100,000.  This encouraged deposit insurance brokers, who could place large sums divided into lots of $100,000 each, to shop for the thrift willing to pay the highest interest rate–no matter how shaky its assets or bad its management.  These so-called “brokered deposits” poisoned the system.

Egged on by thrift industry lobbyists, the Reagan Administration went beyond mere interest-rate deregulation.  Aided by willing Democrats, they hustled through Congress an incredibly shortsighted piece of legislation, the Garn-St Germain Act of 1982, which removed regulatory barriers to thrift industry business activities.  No longer was the industry largely confined to financing housing.  Overnight, the sky was the limit.

The results were devastating, as all of the authors show.  Before the ink was dry on the new act, the staid thrift industry was invaded by all manner of promoter, swindler, land speculator, junk bond player and money launderer.  Some of the more outrageous cases, spun out in rich detail by the authors of “Inside Job,” are so lurid that a novelist would blush to invent them.

Common to all three books is the sense of outrage and exasperation they leave in the reader.  The outrage stems from the fact that most of the guilty are getting away without any meaningful punishment, either by the courts in the case of the thrift industry crooks, or by the voters in the case of the large number of Congressmen — Democrats and Republicans alike — and executive-branch officials who did not protect the public interest.  Still, what may be worse is the feeling of exasperation: after everything that has happened, nothing was included in the recently enacted bailout legislation to eliminate the essential abuses of the deposit insurance system.

These three books were completed before the final compromises on the Bush program were known, but it is fair to infer that all of the authors would be mightily disappointed in what was done.  There is a surprisingly strong consensus among them about what the major elements of true reform would be: substantial cutbacks in the size of deposit that the Government would fully insure, along with the imposition of deductibles; meaningful curbs on brokered deposits; better supervision of thrifts through upgraded personnel and tougher rules; better coordination and cooperation between bank and thrift supervisors on the one side and the Justice Department and the F.B.I. on the other; careful screening of thrift officers, directors and owners; realistic accounting; and, finally, significant increases in capital requirements, probably the only major reform of the Bush program and the legislative compromise that resulted.

A final thought.  These books force us to face up to an embarrassing and painful reality: we as a nation are badly governed in situations where our lawmakers and executive-branch officials are preoccupied either by ideology or by the narrow interests of a relative handful of big campaign contributors.  In this case, and no doubt in others to come, the public interest has simply been ignored.