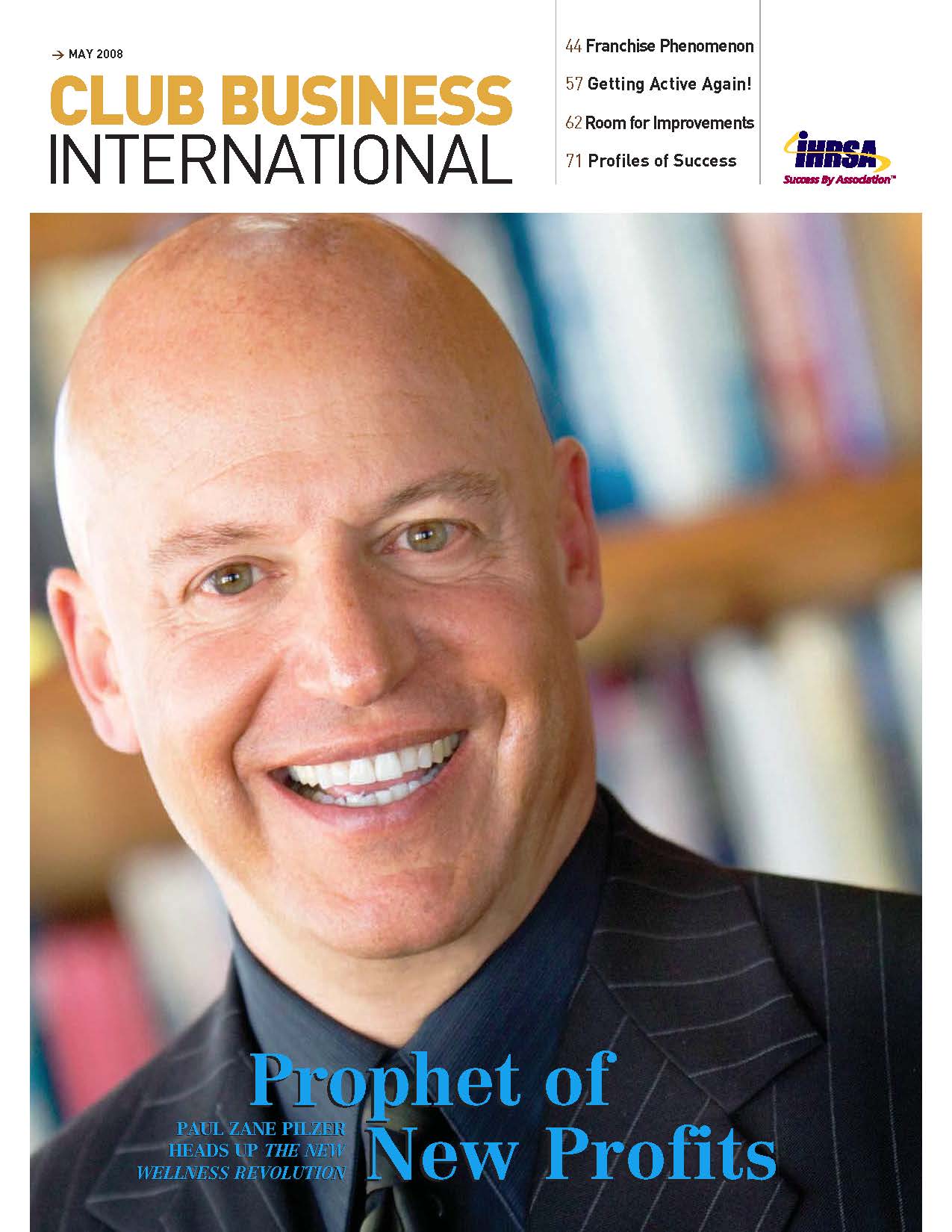 The renaissance economist and entrepreneur explains how clubs, corporations, government, and the public can profit from The ‘New’ Wellness Revolution

CBI: You’ve had a very varied career; you’ve enjoyed a great deal of success as, among other things, a speaker, author, economist, and business owner. What drives you?

Paul Zane Pilzer: Over the past 35 years, there’s been a consistent pattern. Every endeavor that I’ve entered into has had the same point of departure: each business I’ve started was based on the simple fact that, in one way or another, I was an unhappy consumer.

CBI: You recently updated your 2002 best-seller, The Wellness Revolution, which predicted and helped set the stage for the current groundswell of interest in healthy lifestyle behaviors. What’s “new” in your newest book, The New Wellness Revolution?

PZP I left out a great deal of material that I didn’t know back in 2002. I didn’t know, for instance, that IHRSA or the IDEA Health and Fitness Assocation even existed. So my knowledge base about wellness grew by about 500% in the year after the first book was published.

I also began to notice the emergence of promising new international trends: like McDonald’s becoming the largest buyer of apples for its salads and Wal-Mart becoming the largest distributor of wellness products—although that’s more about putting things that people want on shelves than actually driving them to wellness—and Whole Foods evolving as a business entity predicated entirely on healthy foods. In the past, I’d written negatively about larger companies, but, in reality, they were just following the basic laws of economics in supplying what their customers wanted.

The new book contains updated numbers and is more enthusiastic about finding a solution to our healthcare dilemma.

CBI: How do you see health clubs fitting into an overall “fix” for the country’s current healthcare system and, in turn, its health-insurance system?

PZP:The No. 1 medical problem in the U.S. today is “voluntary poor health”—that is, a lack of wellness. It leads to conditions such as obesity, which contributes to chronic medical problems such as type 2 diabetes. Each year, we spend more money on Type 2 diabetes—including time lost from work—than we do on education. And the cure is: a sound diet and regular exercise.

Health clubs have done a good job of building out distribution—they’re reasonably priced and proficient at teaching people how to exercise safely—but they’ve done a terrible job of turning those who need their services the most into customers. They’re preaching to the choir—sitting back and waiting for prospects to walk through the door. Operators need to reach out to individuals who never in their life have stepped foot inside a club and make them feel welcome. Just look at the outreach that some of the megachurches are doing—offering prime parking and seating to first-time visitors; they make them feel very welcome.

CBI: What about the financial half of the equation?

PZP: At the moment, there’s a real, and a persistent, financial disconnect between health clubs and employer-sponsored health plans. For the past 23 years, I’ve been lobbying to make it legally possible for employer health insurance to pay for exercise and other fitness services, and I’ve been unsuccessful; but, each year, we raise the public’s, employers’, and the government’s awareness about the fact that wellness programs can save us money. However, I haven’t seen a leader emerge who can hammer this home to Congress; President Bush exercises religiously and is in great shape, but he hasn’t taken up the battle. The club industry, overall, hasn’t succeeded either in getting Congress on board. IHRSA has been remarkably focused and professional in its efforts, but, thus far, none of us has been successful in making fitness an integral part of employer-sponsored health plans.

CBI: You talk a great deal about the impact that the private sector has on wellness. What about the federal government?

PZP: It has a huge role to play. Unfortunately, the National Institutes of Health and virtually all of the other federal health agencies—from the Veteran’s Administration to Medicare—are locked into a sickness model. They only deal with people when they’re sick. In the same way that we have a Secretary of Health and Human Services (SHHS), we need a Secretary of Wellness who will work to help keep people from becoming HHS clients . . . All you have to do is check out the waistlines of many senior politicians to figure how much they know about wellness.

CBI: Which of the current presidential candidates’ healthcare proposals do you feel is the most viable?

PZP: None of them! It’s one thing to say we need to reform health insurance in a speech, but what, exactly, is the health insurance we need to reform? Medicare covers 47 million Americans; Medicaid covers 44 million Americans; the government also offers coverage for 10 million veterans; and employers provide group healthcare for 150 million people. So where, which areas, do you really want to reform? I suspect that none of the candidates even know that these subgroups exist, or understand that each needs to be considered separately, or recognize that they need to be adjusted for in an evolutionary fashion. My personal opinion: I don’t believe any of them really knows the current system, let alone what would work in terms of reform.

CBI: Another topic that the candidates have been talking about a lot is the economy—the subprime mortgage crisis, a possible recession, etc. As an economist, what’s your take on the current situation?

PZP: First, it’s important to recognize that there’s no longer a macroeconomy in the U.S. While Detroit may be in serious trouble, Seattle has virtually zero percent unemployment, so it actually needs people. Today, economic upturns and downturns are regional and industry-specific in nature. Last Christmas, for instance, overall sales were down by 2%, but the sale of video and electronic devices was up by 30%. To evaluate the economy accurately, one now needs to make use of new, more sophisticated analytical tools.

CBI: A few years ago, you were instrumental in helping to get Health Savings Accounts (HSA) legislation passed. What role did you play?

PZP: I first testified before Congress on the need for a portable health-insurance account in 1985, and, from then until 2003, I lobbied, met with senators, and wrote white papers promoting what were then called Medical Savings Accounts. HSAs grew out of a desire to give people their own money to spend on health insurance, but, in retrospect, they’ve proven to be woefully inadequate. They were supposed to be universal medical-spending accounts for individuals, but, when they were added to the Medicare Modernization Act, they were emasculated by dramatic budget constraints. In reality, they’ve become long-term savings vehicles for high-income-bracket taxpayers.

I was excited about HSAs at the outset, but, today, they shouldn’t have anything to do with a person’s employer.

Today, the Health Reimbursement Arrangement (HRA) is what we wanted the HSA to be—a single account to which employers can contribute, allowing employees to make their own medical decisions. Right now, there are 4 million HSAs and 10 million HRAs, and HRAs are growing faster.

PZP: Absolutely! Every employer, including every health club, in the U.S. should have a health-benefits program that matches their business objectives for recruiting and retaining employees. For example, today, a club owner would be well-advised to offer a health-benefits allowance based on hours worked—the more hours you work, the more you get in your HRA to purchase health benefits. Those dollars are worth twice as much as wages because they can be used, tax-free, to buy health benefits. Right now, Zane Benefits is working with a club now that has a lot of personal trainers, and it wants them to bring more people to the club, so it’s doing just that—tying health-benefit dollars to hours worked.

CBI: You’ve predicted that employer-sponsored healthcare plans will disappear by 2020? Why?

PZP:Employer-sponsored health plans exist because of what I regard as a mistake, in 1945, which permitted companies to provide workers with health benefits that were tax-exempt. That priced individual plans out of the market. The new 2007-08 regulations allow firms to give employees money for healthcare insurance as a tax-free allowance—that as opposed to employers directing the plans themselves. And, today, most employees would rather have the option of obtaining their own coverage. Back in ’45, the average job tenure was 25 years. Now, it’s three years or less, and no one wants their family to be tied to an employer for their health insurance.

CBI: What would you view as a viable and implementable fix?

PZP: I actually believe that we’re getting close. I think that the private sector should provide health insurance on a competitive basis, just as it does in the case of life and auto insurance, and that government should be the insurer of last resort. There are 4 million people in this country who can’t afford health insurance, which is why we have Medicaid; and there are 47 million people over 65 whom private insurers won’t cover, which is why we have Medicare. The problem is that there are 10-15 million people who, while they’re not yet poor or old, are uninsurable because of a preexisting medical condition.

In 1996, the Health Insurance Portability and Accountability Act mandated that all states must have coverage for former employees with preexisting conditions. It’s called state-guaranteed coverage, and it’s two to three times more expensive than regular insurance, but most people don’t know about it.

CBI: What’s the “the next big thing” in wellness?

PZP:The next big thing is wellness—it’s creating new opportunities in virtually every field you can think of. I like to use cars as an example because, today, wellness is actually driving part of the auto industry. Now, you can buy safety as an option—you can buy additional airbags for your car; and hybrids, for example, reflect a concern for the environment. The same sort of scenario is unfolding with restaurants. People now pick where they want to eat out, in part, by how they’ll feel after the meal, how well they’ll sleep that night, and how they’ll feel the next morning. Simply satisfying their hunger has become secondary to wellness for many restaurant customers.
In an ever-growing number of areas of life, you can now buy wellness.
That’s particularly true, obviously, in the case of health clubs.

CBI: How can clubs, in general, do more to capitalize on this trend?

PZP: As I suggested at the outset, the most important thing they need to do is expand their market of customers. My impression is that most operators still sit around, waiting for individuals who are already sold on the value of membership—people who belong to, or have belonged to, another club—to walk in and check out what they’re doing. They’re locked into cutting up the pie, rather than growing the pie. Instead, they should cultivate relationships with their local physicians, weight loss centers, major employers, and other organizations to help them access and attract people who don’t belong to a fitness club. Build on these wellness alliances. No amount of exercise or diet is going to solve the wellness problem—it’s a holistic problem that requires a holistic solution.

Clubs have to make themselves a part of—if not the center of—the solution for their communities.