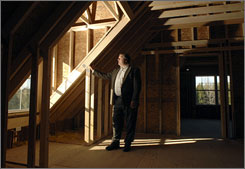 Cardinal puts $100 to $200 a month into each employee’s health reimbursement account. Even if Berneche carries out his plan to nearly double the size of his company, he still expects to save at least $360,000 this year with the new program. Zane Benefits handles the accounts and reimburses employees out of their individual accounts for medical expenses.

Nick Trikolas plans to drop health insurance for his employees and give them money to buy their own coverage. He says doing so will put him in the vanguard of a movement by employers searching for answers to rising health costs.

“This may be the future of health insurance,” says Trikolas, CEO of Ilios Partners in Chicago, which plans to switch its 100 employees from group to individual coverage this year.

As health insurance costs continue to rise, some employers are adopting a controversial new approach: ending group coverage and giving employees $50 to $200 or so a month to help them buy their own.

The shift is touted as a lower-cost way for employers to offer workers some kind of health coverage, while making smaller and more predictable financial contributions toward that coverage. Like other companies considering the switch, Ilios will pay a portion of employees’ medical costs into tax-free accounts that workers can tap. It also will provide a link to an independent website where workers can compare price quotes from a variety of insurers.

If broadly adopted, the new model would represent a fundamental shift in health coverage in the USA. Most people with health insurance are in group plans offered by their employers.

Critics say the change would end the long-standing, implicit social pact to provide coverage to sick and healthy workers alike in favor of a more Wild West, go-it-alone approach that could benefit young and healthy workers but leave those older and sicker unable to get medical insurance.

That’s because ending group coverage removes a key protection in group insurance plans. Insurers cannot reject members of group plans for health reasons, and everyone in the group pays the same premium.

In most states, insurers can reject individual applicants for health reasons and can charge widely varying premiums based on the applicant’s age, health history and other factors. Only in a handful of states, such as New York, Massachusetts and New Jersey, must insurers sell coverage to everyone, regardless of their health.

“What scares me is it’s tempting for an employer who may have one or two sick employees to say, ‘You’re not my problem, try to get coverage from the state,’ ” says John Hickman, an Atlanta attorney who advises businesses on their benefit plans. “It could leave a lot of people without coverage.” He says the new model could work if Congress passes national rules requiring insurers to take everyone, regardless of his or her health.

Large companies use group coverage as an important recruitment and retention tool, but smaller firms struggle more with costs and are less likely to offer group coverage.

Proponents of individual coverage, including Paul Zane Pilzer, whose Zane Benefits firm offers services that help employers make the switch, say most workers will be able to buy coverage on their own.

The healthiest, Pilzer says, will get coverage for less than they pay now. Monthly premiums can be less than $100 for some younger, healthier people but several times that for others.

“The healthy employees don’t have to pay for sick employees,” says Pilzer, a software entrepreneur and author. He says employers can save money because they contribute a set amount per employee — often far less than they pay for group coverage.

Sara Rosenbaum, a law professor at George Washington University School of Public Health, says offering money toward individual policies “may be somewhat helpful for workers in businesses that have never been able to offer insurance coverage,” but it is a “radical step backward” for those who decide to cancel group policies.

She says proponents may mislead employers into thinking individual and group coverage are the same, when there are often striking differences.

“Many employees may find themselves shut out of the individual market,” Rosenbaum says, “and even if they can get in, the coverage is dramatically less than what they can get in group products.”

Though no one tracks the number of employers who send workers out on their own, it is only a fraction of the total number who offer health insurance. Pilzer says he has more than 100 clients; his company sets up and manages tax-free medical reimbursement accounts for the clients’ employees. He sold his first company to Steve Case’s Revolution Health, which offers the service through Sam’s Club.

The insurance industry has acknowledged the difficulties some people face in getting coverage. In 2007, officials in California and Connecticut fined several insurers for canceling individual policies after patients racked up large medical bills.

The group said insurers should provide coverage to those who aren’t sick enough to qualify for the state plans. And, it said, insurers should not cancel policies solely because applicants provided incomplete medical information, so long as any omissions were unintentional.

Because individual policies are tied to each applicant’s medical history, insurers can limit or exclude certain conditions. For example, an insurer may offer a person with hay fever a policy that excludes coverage of any upper respiratory condition. “Something as simple as hay fever may mean you are not covered if you get pneumonia,” Rosenbaum says.

Like some other employers contacted, Trikolas says he doesn’t expect his employees, who are mainly in their 20s and 30s, will have a problem qualifying for individual insurance. If any do, he says the company will help them find coverage.

“I can guarantee you that no company would leave those people high and dry,” Trikolas says.

David Davis, executive vice president of Sweet and Sassy Franchising, which franchises salon and spa services aimed at girls ages 5 to 12, says his company plans to introduce the Canopy program this year and end its group coverage. Davis, whose company is based in Southlake, Texas, says the main goal is to give workers more options.

“We have employees who have families with young kids, some have older kids and some employees are single,” Davis says. “Those scenarios present widely varying health care needs. Something like this gives us and our employees a little more flexibility.”

What happens if some can’t get coverage?

“Currently, we don’t have any issues like that at all,” Davis says. “We’ll have to address that if it occurs. As we bring new people on, we’ll get a better sense of how it will work. We may jump into it and say it’s the best thing we’ve ever seen, but we will evaluate that as we go.”

Canopy’s Kashyap says most people can get insurance. Those who cannot, he says, should be looked upon like bad drivers, who have to pay more for auto insurance. He expects health insurers, possibly with the help of government or employers, ultimately will develop coverage for higher-risk people.

“There are some people in the minority who will be adversely impacted, but the system in general is designed for the majority,” Kashyap says.

Bret Berneche, chief executive officer of Cardinal Homes in Wylliesburg, Va., used Zane benefits to help get health insurance for himself and his 112 employees.

In August, Berneche told his employees that their group health insurance would end that month.

Between premium increases and mounting state and federal rules, offering insurance was costing the company too much — $846,000 a year.

“It was certainly a blow,” Berneche says. “The choice was having the health plan we had or going out of business.”

After he canceled the group plan, he heard about Pilzer’s program and signed on. Cardinal puts $100 to $200 a month into each employee’s health reimbursement account.

Even if Berneche carries out his plan to nearly double the size of his company, he still expects to save at least $360,000 this year with the new program. Zane Benefits handles the accounts and reimburses employees out of their individual accounts for medical expenses.

Many employees were able to buy individual policies for less than the monthly amount put in by Cardinal, Berneche says. The money also can be used for eyeglasses, dental care and other medical expenses.

“I don’t know if everyone bought insurance. But there are various ways to get some kind of health coverage, through state programs and self-pay programs and catastrophic insurance programs,” he says. “Everyone here has a health reimbursement arrangement that they can spend the way that best suits their families’ needs.”

Though some pay less for premiums than they did under the company-subsidized group plan, others, including Berneche, pay more.

He and his wife, Dorothy, both in their 40s, pay about $900 a month in premiums, and each has annual deductibles of $5,000, meaning that’s what they pay before coverage kicks in each year. The cost of prescriptions adds $200 to his monthly costs. He says his total costs are at least $1,000 a month more than under his group policy. Still, he says, “I am happier today with this program … than I was before.”

Berneche says he can talk more openly with company employees about health issues. He does not feel as constrained by federal and state rules and has more control over health costs.

“I had to worry about that every year,” Berneche says. “We’re no longer in the health care business.”

Legal questions remain about whether to classify this hybrid coverage as group or individual policies. Consumer protections are not as strong in individual plans because states allow them more leeway than group plans.

Berneche had to certify on his individual insurance application that his company was not reimbursing him. Yet the contributions his company provides are at least a partial reimbursement.

In Virginia and many other states, policies sold as individual plans have different rules on what they must cover and how applicants can be scrutinized.

For instance, says Mila Kofman, a health policy professor at Georgetown University, “what happens if an employee can’t buy an individual policy” but others in the company can? “Then you have a potential violation of the non-discrimination provisions” in federal law.

Daryl Richard, a spokesman for UnitedHealth, says, “A number of groups, including brokers, insurers and government agencies, are seeking to fully understand the nuances of how individual and employer-sponsored coverage may best work together in compliance with both state and federal regulations.”

The main goal, he says, “is finding ways to make health coverage available to as many Americans as possible.”