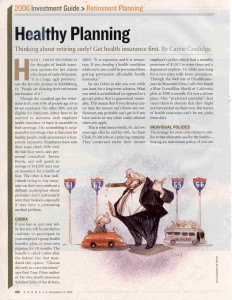 “It is expensive and it is temporary. If you develop a health condition while on it, you could be prevented from getting permanent affordable health insurance.”

“So instead of tapping the [Health Savings] Account for a $500 doctor bill today, pay the bill out of other funds and let the HSA grow. But hang on to that $500 receipt. Since there is no time limit on reimbursements, says Pilzer, you can reimburse yourself out of that account decades later, after the money has compounded tax free.”

Helen L. Modly shudders at the thought of health insurance options for her clients who dream of early retirement. “It is a huge, ugly problem,” says the fee-only planner in Middleburg, Va. “People are delaying their retirement just because of it.”

Though the standard age for retirement is 65, only 64% of people age 55 to 64 are employed. The other 36%, not yet eligible for Medicare, either have to be married to someone with employer health insurance or have to scramble to find coverage. The scrambling is occasioned by two things. One is that, even for healthy people, medical insurance is fearsomely expensive. Employers have seen their costs climb 63% over the last four years, says personnel consultant Towers Perrin, and will spend an average of $14,500 next year on insurance for a family of four. The other is that individuals trying to buy insurance on their own confront a difficult marketplace whose providers don’t particularly want their business, especially if they have a preexisting medical problem.

If you lose or quit your job, by law you will be entitled to continue to participate in your employer’s group health benefits plan, at your own expense, for 18 months. The benefit is called Cobra after the federal law that mandated this option. “Choose this only as a very last resort,” says Paul Zane Pilzer, author of The New Health Insurance Solution (John Wiley & Sons, 2005). “It is expensive and it is temporary. If you develop a health condition while on it, you could be prevented from getting permanent affordable health insurance.”

So, use Cobra to tide you over while you hunt for a long-term solution. What you need is an individual (as opposed to a group) policy that is guaranteed renewable. This means that if you develop cancer later, the insurer can’t throw you out. However, you probably can’t get in if you have cancer or any other costly ailment when you apply.

This is what James Smith, 55, did two years ago after he and his wife, Sei Yuen Chak, 55, left jobs at a printing company. They continued under their former employer’s policy, which had a monthly premium of $1,012 to cover them and a dependent nephew, 14, while searching for a new plan with lower premiums. Through the Web site of Ehealthinsurance in Mountain View, Calif. they found a Blue Cross/Blue Shield of California plan at $790 a month. It’s not a deluxe plan: This “preferred provider” deal steers them to doctors that they might not have picked on their own. But buyers of health insurance can’t be too picky these days.

The strategy for most early retirees is similar to that ultimately used by the Smiths–buying an individual policy, if you are healthy enough to qualify for a reasonable rate. That means normal blood pressure, no diabetes, no cardiovascular disease, no cancer and so on. You will be examined by an insurer-approved physician.

Most people considering early retirement should stop participating in their group health insurance plan, if they have one, when they are healthy, says Pilzer. Instead, buy your own policy. Your employer might chip in toward the cost (some employers give cash rewards to employees who opt out of the company plan after showing evidence of alternative coverage). You will still be paying out of pocket, but the investment is worthwhile if it gets your foot in the door. Canceling your policy based on health status is prohibited in the majority of states as long as you pay your premium, but the cost can be increased annually to account for inflation and your age. To keep the premium down, raise the deductible every year, recommends James Oatman, chief actuary for Assurant Health, an insurer.

“Lock in a base rate when you are young and healthy,” says Pilzer. “Everyone should have an individual policy. The time to get it is when you don’t need it.” The leading issuers of individual health plans are Assurant, Blue Cross/Blue Shield, Humana, Golden Rule and Aetna.

A preexisting condition is likely to make a policy a lot more expensive (rates potentially double the standard ones) or simply unobtainable. Some health insurers may be willing to accept preexisting conditions that others will not, says Robert S. Hurley, vice president of strategic operations at Ehealthinsurance. People denied coverage because they are sick can usually get a policy from a state assigned-risk pool.

Thirty-three states have risk pools, with coverage for an individual ranging in cost from $2,064 a year in Georgia to $11,424 in Indiana. Most of the rest of the states force insurers to accept all comers, albeit at stiff rates; an unhealthy individual’s rate can be 15% to 200% higher than a healthy individual’s of the same age.

If you are healthy and thinking of retiring early, consider starting a health savings account. HSAs, a new feature of federal tax law, are coupled to high-deductible health insurance policies. You put tax-deductible money into the HSA, same as you would into an IRA (until age 65). Tax-free withdrawals can be made anytime to pay medical bills, but your objective is to leave as much money as possible in the account to compound tax free and be there for medical costs as you get older. The amount you (or your employer) can put into the account is equal to the deductible on the insurance policy, up to a ceiling. In 2006 that ceiling will be $5,450 for a family policy. You will be able to throw in another $700 a year if you are over 55.

High-deductible plans have another advantage: They tend to be more lenient when it comes to a preexisting condition, says Hurley of Ehealthinsurance.

HSAs are very unlike the use-it-or-lose-it flexible spending accounts that have been around for years. On the contrary, the whole idea is to save for doctor bills in your golden years. So instead of tapping the account for a $500 doctor bill today, pay the bill out of other funds and let the HSA grow. But hang on to that $500 receipt. Since there is no time limit on reimbursements, says Pilzer, you can reimburse yourself out of that account decades later, after the money has compounded tax free.

One thing is for sure. Going without insurance is not an option. Last year more than half of all personal bankruptcies in the U.S. were prompted by medical problems, according to a joint study conducted by professors at Ohio University and Harvard. The revised bankruptcy bill that went into effect in October will make it even more difficult for families to pursue bankruptcy to wipe out their medical debts, according to Stuart Gollin, head of the bankruptcy and solvency practice at accounting firm Weiser Llp.

The bottom line is simple, warns Gerry T. Smolka, senior policy adviser at AARP’s Public Policy Institute: “If people don’t think and plan ahead, they may find themselves with some nasty surprises.”