The New York Review of Books by John Kenneth Galbraith 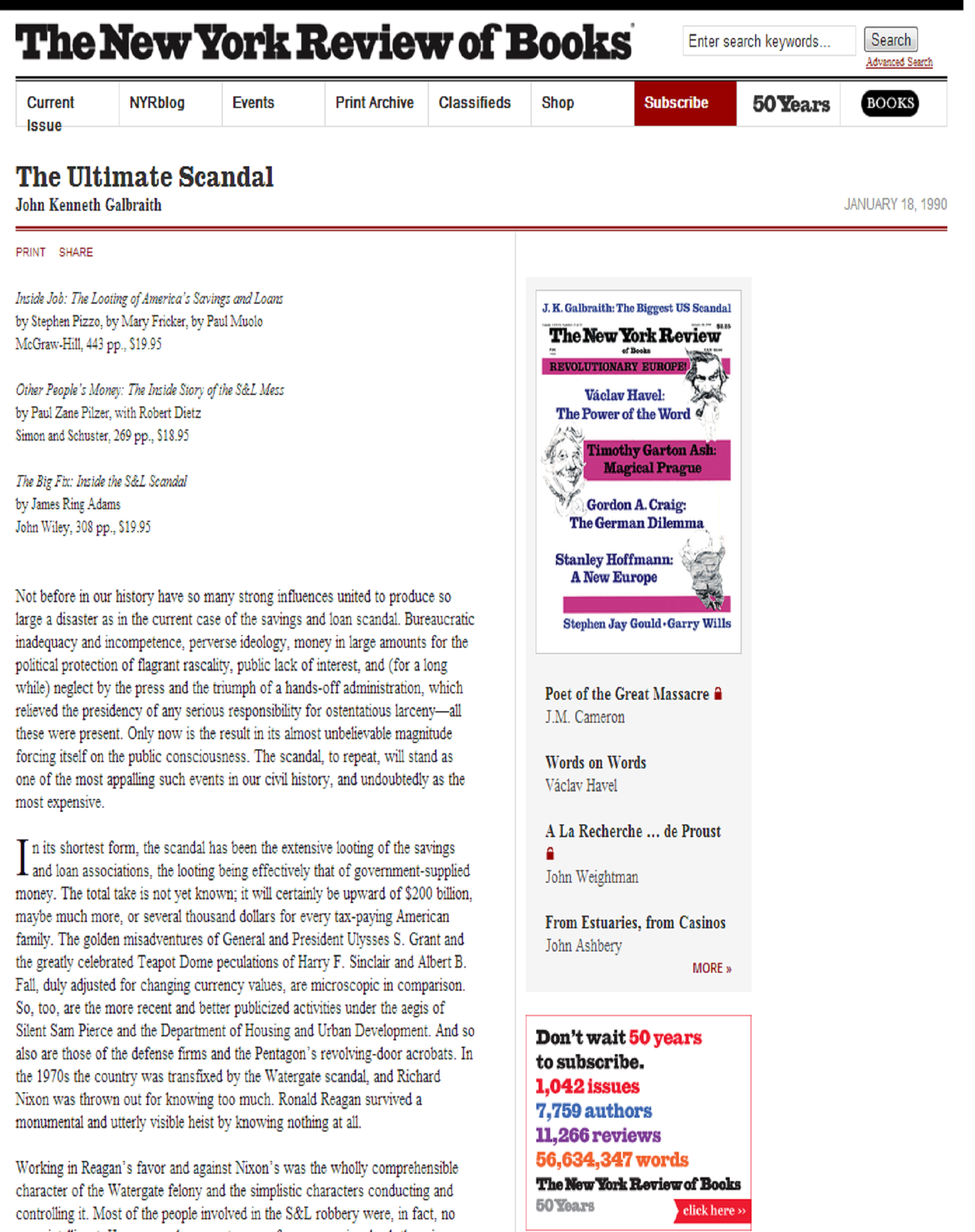 Not before in our history have so many strong influences united to produce so large a disaster as in the current case of the savings and loan scandal. Bureaucratic inadequacy and incompetence, perverse ideology, money in large amounts for the political protection of flagrant rascality, public lack of interest, and (for a long while) neglect by the press and the triumph of a hands-off administration, which relieved the presidency of any serious responsibility for ostentatious larceny—all these were present. Only now is the result in its almost unbelievable magnitude forcing itself on the public consciousness. The scandal, to repeat, will stand as one of the most appalling such events in our civil history, and undoubtedly as the most expensive.

In its shortest form, the scandal has been the extensive looting of the savings and loan associations, the looting being effectively that of government-supplied money. The total take is not yet known; it will certainly be upward of $200 billion, maybe much more, or several thousand dollars for every tax-paying American family. The golden misadventures of General and President Ulysses S. Grant and the greatly celebrated Teapot Dome peculations of Harry F. Sinclair and Albert B. Fall, duly adjusted for changing currency values, are microscopic in comparison. So, too, are the more recent and better publicized activities under the aegis of Silent Sam Pierce and the Department of Housing and Urban Development. And so also are those of the defense firms and the Pentagon’s revolving-door acrobats. In the 1970s the country was transfixed by the Watergate scandal, and Richard Nixon was thrown out for knowing too much. Ronald Reagan survived a monumental and utterly visible heist by knowing nothing at all.

Working in Reagan’s favor and against Nixon’s was the wholly comprehensible character of the Watergate felony and the simplistic characters conducting and controlling it. Most of the people involved in the S&L robbery were, in fact, no more intelligent. However, where great sums of money are involved, there is a popular presumption of personal acuity, one that is widely accepted not only by the malefactors toward themselves but also by others as well. Accordingly, both the government and the public give special deference to crime in the field of high finance. Those guilty or stupid are accorded the benefit of the doubt. Given the amount of money involved, it is assumed that they must somehow know what they are up to. In recent weeks, Mr. Charles H. Keating, Jr., of Phoenix, Arizona, and Irvine, California, whose institution honoring Abraham Lincoln failed at a public cost of well over a billion dollars, has urged that with a little time and freedom from regulation he could have got it all back, including presumably the million or so he personally assigned to politicians to exercise, as he openly asserted, government influence on his behalf. Previously he had been given quite a bit of extra time to deal with his losses, at grave public cost. But who would wish