Is the Earth being depleted of natural resources? Nope, says economist, entrepreneur and author Paul Zane Pilzer. That’s because there is plenty of the ultimate natural resource: human ingenuity.

Economist Paul Zane Pilzer considers himself to be an environmentalist.But he is not your average greenie. Indeed, Pilzer is something of an icononclast: There is no such thing as scarcity of natural resources, he argues.When humans were “running out” of, say, rubber during WWII, they invented synthetic rubber. A former college professor, an advisor to two White House administrations and a multimillionaire software entrepreneur, Pilzer was born in Brooklyn to immigrant Jewish parents who ran a small business. Pilzer says that experience—watching his family scratch out a better living, producing curtains and bedspreads— inspired him: It showed him how hard work can produce innovations. Eventually, he began to wrestle with the economic orthodoxy concerning scarcity. He came to realize that human ingenuity always comes up with a new “natural” resource.

The environment is an important issue, Pilzer says, but it’s not the biggest crisis facing Americans—that would be healthcare. Pilzer says the problem with the U.S. system of health care insurance is that it’s tied to employment. He should know: Pilzer’s family once lost their health insurance while his wife was pregnant. Pilzer is the founder of two companies that provide individualized health benefits. His goal, he says, is “helping every American family get permanent, affordable lifetime health insurance.” For more on the booming health industry, read The New Wellness Revolution (Wiley, 2007) and for Pilzer’s solutions to the health insurance problem, visit www.zanebenefits.com.

Registered Rep: How did you come upon the concept of unlimited wealth, the idea you describe in your book God Wants You To Be Rich? 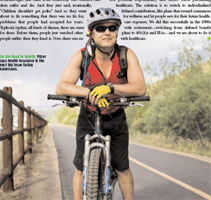 PZP: Economics is the study of scarcity.And,when I was studying economics at Wharton, I was thinking, “What’s scarce?” They told me land was scarce, and that there was only a limited amount of food.Yet every year food productivity went up—by a factor of 300 times per acre from 1930 to 1980, creating effectively 300 times more land.

RR: Back in the late 1700s and early 1800s,Malthus [the English economist and demographer] predicted that hordes of people were going to starve to death: too many people, not enough food.Who knew that fewer and fewer farmers could produce more and more food?

PZP: Yeah,Malthus looked at the amount of farmland, saw the population going up, and said the population would be controlled by the limited food supply. The worldwide population was almost one billion in 1800, when Malthus said it can’t get any bigger, because the farms can only produce so much food. And he was right at that time.What he didn’t have a way of seeing was productivity growth. The same farm 100 years ago was producing half as much food, and half as much before that. And he couldn’t foresee the real green revolution. Remember, that’s what it used to be called?

RR: He didn’t factor in technology.

PZP: Yes, Malthus was wrong. His mistake was that he held technology constant. He looked around at the farms and he didn’t have data that showed that farm productivity would far outstrip humans’ ability to reproduce—all the way to 6 and a half billion people today.

RR: There must be an investing lesson in there.

PZP: From an investment standpoint, the classic mistake made throughout history is holding technology constant. If you remember in the 1970s,we were running out of oil, running out of copper, we were running out of all these things. But the pessimists missed two things.One is that if we run out of a resource, we find cheaper ways to get it, because prices start going up.Or, secondly, we invent something completely new outside the industry that just completely displaces the “scarce” resource. Take vinyl records. In the 1980s, just to make the vinyl, which was an oil derivative, it cost $3.50; the record business was predicting that album prices would have to go up to $10 or $12.And what came along? The digital CD. It completely decimated the vinyl record industry. The whole industry disappeared in five years. So we see these radical changes the minute a commodity price goes up; people look around and ask,“How can I get this commodity cheaper?” And then if it keeps going up, somebody says,“Who cares about this commodity? Why are people using the commodity? How can I make a substitute so they don’t need it anymore?”And that’s the history of the world in metals, in rubber, almost really everything.

RR: Hence your idea of unlimited resources. Is that how you came to this rather heretical idea?

PZP: As I was thinking about this idea, I stumbled onto the work of the late Julian Simon, a professor who wrote a book called The Ultimate Resource. I started writing with him, too.To Simon, the ultimate resource is human ingenuity. So I started studying. I lived through the oil crisis, and the coal crisis. I realized [that] we were always running out of some resource, but the actual resource we were running out of wasn’t a resource until human ingeniuity invented it, and we’re always inventing new resources.

Take oil. Oil was not a resource in Biblical times; it was something you ran away from because it poisoned the water.

We made it a resource when we learned how to burn it, and refine it to make gasoline. Then we made transportation. So it’s all human ingenuity.

RR: So, your point is that we’ll always think of something new?

RR: That natural resources are not scarce, that goes against everything the green movement is promulgating.

So that was our whole history, until our generation. Today, wealth equals physical resources times technology. Now, there are key technological changes over your lifetime—and you can change the “T” for yourself.

RR: When did this technology start to change the equation?

PZP: Probably around 1950. Before that the technology was just what you were born with. So, if you were born into a farming environment, you learned how to be a farmer, and, of course, you did that the rest of your life.What else could you do? Your name even reflected your occupation. But today, as we’ve seen in Japan, Korea—Singapore is the best example—it’s all about technology, not the physical resources, and you can get more technology at any given moment in time.

So, whenever we are running out of something,we think of something else; you find more “T” to add to the equation.

RR: Give me some examples.

PZP: Now if we’re running out of some resource, what can we do to find a new resource? In World War II, we were cut off from Malaysia and all rubber came from Malaysia. You can’t move a jeep or a tank without some rubber. Rubber used to come out of trees in that part of the world. So,we invented syn- thetic rubber.And it’s always when we’re running out of something and stuck up against the wall, the scientists go to work and you just say, “Fix this.”

RR: Necessity is truly the mother of invention, then, eh?

PZP: Yes, economics can solve all these problems when we have faith in technology. I say “have faith, you have to dream big.”My best examples are in medical technology. From Jonas Salk and the polio vaccine, Louis Pasteur, just think of all the scientific breakthroughs that came from somebody who watched children suffer and die. And they just said, irrationally, “Children shouldn’t get polio.” And so they went about to fix something that there was no fix for, problems that people had accepted for years. Typhoid, typhus, all kinds of disease, there are cures for these. Before them, people just watched other people suffer; then they fixed it. Now, there was no evidence it could be fixed. They put their minds to work on it. And it’s a much richer state ofmind to be in, to think that,“God gave us problems to solve, not to live with.”And if we apply that frame of mind to technology and economics, why, history shows us we can solve difficult problems. And today’s current, “green” crisis is no different.

RR: What do you see as the major issue facing Americans today?

PZP: It’s health insurance,mainly because consumers have limited personal responsibility and choice when purchasing healthcare. The solution is to switch to individualized defined contribution, like plans that reward consumers for wellness and let people save for their future healthcare expenses. We did this successfully in the 1980s with retirement—switching from defined benefit plans to 401(k)s and IRAs—and we are about to do it with healthcare.