When To Choose an HSA – The Wall Street Journal

Paul Zane Pilzer
Articles, Media
Comments Off on When To Choose an HSA – The Wall Street Journal 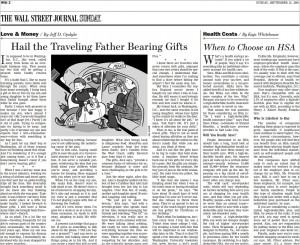 Sure, HSAs and IRAs have similarities. You contribute a certain amount each year tax-free, and money accumulates in a tax-protected amount. HSAs have the added benefit of tax-free withdrawals. But HSAs can often be the more complex of the two. Why? Because you have to be covered by a high-deductible heath insurance plan in order to invest in one.

That means the real question for those considering an HSA is: “Do I want a high-deductible health insurance plan?” says Paul Zane Pilzer, co-founder of Extend Benefits, a health-care services provider in Salt Lake City.

Will You Really  Save?

People interested in an HSA should take a long, hard look at whether high-deductible health insurance will save them money on their health care.  With a high-deductible health plan, the insured pays all costs up to a certain dollar amount–usually between $1,000 and $5,000–before the insurance company will pick up the tab.  By passing on a big chunk of out-of-pocket costs to the insured, the insurer often can charge less.
The wild card: out-of-pocket costs, which will vary depending on factors including how savvy you are at shopping for your health care, and how often you get sick.  Healthy people–who tend to need no more than an annual exam–are more likely to save with a high-deductible plan because they have minor out-of-pocket costs.
Of course, a high-deductible HSA can work out cheaper despite the risks of higher out-of-pocket costs.  Chris Krupinski, a graphic designer in Fairfax, VA, for example, had been paying $900 a month in premiums alone for her health insurance.  By switching to a high-deductible HSA, she cut her premiums to roughly $300 a month.  Meanwhile, her seemingly daunting $3,500 deductible requires her to contribute only $291 a month to her tax-sheltered HSA, resulting in total costs of less than $600.
Unlike Ms. Krupinski, however, most working-age Americans have employer-provided health insurance, where the employer pays the bulk of the costs.  If this is the case, it’s usually wise to stick with the coverage you’re offered, says Paul Fronstin, director of health research with Employee Benefits Research Institute, Washington, D.C.
Your employer may offer insurance that’s compatible with an HSA, but it’s rare.  Currently, only 2.3% of employers offer a high-deductible plan that is eligible for use with an HSA, according to the Henry J. Kaiser Family Foundation.

Who Is Likeliest to Buy

The number of companies adopting these plans is expected to grow, especially if health-care costs continue to shoot higher.  Under current circumstances, however, the people who will find they can benefit from an HSA mainly include those who buy health insurance from the individual market, such as self-employed people and the uninsured.

Few companies have shifted costs to such an extent that it makes sense for workers to drop out of the employer plan in exchange for an HSA, Mr. Fronstin says.  Still, it can’t hurt to run a few numbers, Mr. Pilzer says.  Some employers, for example, are charging extra to cover employees’ family members.  People in this type of situation might find they could fare better with a high-deductible plan purchased on the individual market, he says.

If you are considering a combination high-deductible plan and HSA, be aware of the risks.  If you get sick, you may need to spend more out of pocket than you expected.  Also, you are responsible for putting money into the HSA (unless your employer also kicks in).

Finally, make sure you’re comfortable shopping around for medical care, Mr. Pilzer advises.  For some people, it’s a chore they would rather not tackle.