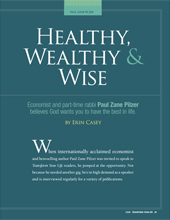 Economist and part-time rabbi Paul Zane Pilzer believes God wants you to have the best in life.

When internationally acclaimed economist and best-selling author Paul Zane Pilzer was invited to speak to Transform Your Life readers, he jumped at the opportunity. Not because he needed another gig: he’s in high demand as a speaker and is interviewed regularly for a variety of publications.

What appealed to him most was the opportunity to speak to people who are actively seeking to transform their lives – and the ability to freely share his belief that Scripture offers the answers needed to do so.

Pilzer’s first book, Other People’s Money, was originally titled “God Loves Savers.” But when editors at Simon & Schuster looked at his credentials as an economist, they balked at the religious content threaded throughout the manuscript. They removed much of that material, knowing people are touchy about mixing money with religion. His editors simply didn’t believe people were interested in reading about God in a book on economics.

A few years later, after the success of his second book, Unlimited Wealth, with a rival publisher, Simon & Schuster asked Pilzer to write a book on economics that kept God in the foreground, God Wants You to Be Rich – The Theology of Economics. This time Pilzer openly wove theology and economics together. The book was an immediate New York Times Best-Seller, and made the New York Times Best-Seller list a second time a few years later.

A veil had been lifted for the publisher of Other People’s Money; people weren’t turned off by reading about God’s plan for their money. If the numbers were an indicator, they wanted that wisdom. But Pilzer wasn’t surprised by the success of God Wants You to Be Rich. “I see God at work every day in economics,” he says. “My work in economics is deeply rooted in my theology.”

Pilzer, who is currently working on a new book, God Wants you to be Healthy and Wealthy, views Scripture as a handbook for life – particularly Genesis through Deuteronomy. “The laws of economics as we know them are all right there,” he says. “It’s a step-by-step guide. And the information contained in Scripture applies as much today as it did in the time of Adam, Abraham and Moses – particularly in finances and health.”

The Genesis of Economics
The foundation of our economy is seen throughout the Bible. In Genesis 23, we read about the first land transaction. The concept of faith and its relationship to our financial well-being is also seen in this first book.

Pilzer points out the tremendous steps of faith Abraham took when he followed God’s call and moved his family to Canaan. “Abraham was a wanderer. He wandered from place to place to find food for his family,” he says. “But when Abraham settled in Canaan, he threw out his father’s idols and put his faith in God for his provision. It’s one thing for a wanderer to pray that he may find food tomorrow. It is an altogether different thing for a settler to pray to God, not for food, but for the strength and faith to produce his own food.” It was a major shift in thinking and lifestyle. It took faith for Abraham to give up his nomadic lifestyle, faith to cultivate the earth and build a life in a new land.

Similar faith, Pilzer believes, is required when it comes to our finances today. In Other People’s Money, he writes,
“[Saving] is a personal act of faith, a form of self-denial that expresses confidence in the future. A person who denies current comfort and pleasure for future happiness is demonstrating his belief in a destiny that can be controlled and improved. It is one thing to pray in church for God’s favor. It is an altogether different proposition to spare today on food, clothing and shelter to have a better life tomorrow.”

Another and perhaps one of the strongest indicators of God’s desire for our financial well-being can be seen in the way wealth is created. Pilzer gives an example of the wealth created when products are made available to the masses. “People work day and night to make products affordable,” he says. “Sam Walton understood that the more people you can help save money, the more money you can earn.” Because their products are affordable for the public, millions of people shop in big-box stores like Wal-Mart every day. That reality made Walton one of the richest people in America. “Only a loving God would create a system in which people build significant wealth in direct proportion to the number of others they help,” Pilzer says.

Wellness for Life
The principles of faith and self-control apply not only to our finances but to our health as well. In his latest book, The New Wellness Revolution, Pilzer explains that in today’s culture, modern medicine and religions miss the best life has to offer because we’ve stepped away from the model and mindset presented in Scripture. Ironically, he says, early religion grew and survived because it addressed not only spiritual needs but also physical needs and issues.

From the Israelites accepting the Ten Commandments and the Mosaic Code, to the Romans adopting the principles of Jesus Christ in 324 A.D., people followed religious laws, which then dealt mostly with secular issues, because they received a better life in the present separately from what they were being promised in the hereafter.

Over time the Judeo-Christian-Islamic principles for how human beings should treat one another evolved into the secular law of the land for everyone (e.g., the U.S. Constitution).

Today, when it is technically legal to commit adultery, lie, and engage in unethical business behavior, as well as countless other activities that could destroy the value of our lives, it is our religious principles that guide us to make the right choices – choices that often mean rejecting immediate gratification in return for a greater long-term benefit. Yet one of the most important choices we make today, what and how we eat, has escaped the purview of most modern religions.

What and how we eat is the reason the Centers for Disease Control estimates approximately 65 percent of Americans are overweight. And Pilzer points out that obesity is a problem even in religions with a heavy focus on diet, like Orthodox Judaism. The letter of the law (which may be outdated) is upheld, but the intention of the religious law (developing self-control, for example) is often overlooked.

“God gave us this operating manual [the Bible] for a better life,” Pilzer says. “And though we’ve evolved and our technology has improved, one place we haven’t grown or evolved is in our diet, because we don’t control our primal desires. Gluttony is denounced from Exodus to Jude; it’s one of the seven deadly sins. Proverbs 23:21 says gluttons will become poor.” But today, more than ever, gluttony and a lack of self-control are the norm.

Advances in our way of life have clearly contributed to decreased health. Scarcity was common in biblical times. People cultivated produced, raised sheep and cattle and fished. Because there were no refrigerators or freezers, they prepared only what could be eaten that day. The human body was designed to hold fat in reserve to supply energy when food wasn’t plentiful.

Today, food is everywhere. From the television to the drive-thru, we are constantly reminded to eat super-sized quantities – often. And although there is no lack of food, our bodies still store reserves for famine. Add to that a marked reduction in physical activity it takes to obtain food and it’s no wonder Americans are overweight.

“We didn’t have obesity before fast food,” Pilzer says. “It’s not the fat as much as it is the fast. When our grandmothers made a meal, we sat at the table, talked, ate slowly, course by course. Today, we drive up and order more than we need because our eyes are bigger than our stomachs. And because it takes 20 minutes for the stomach to transmit the ‘I’m full’ signal to the brain, we eat too much, too fast.”

The Wisdom of Self Control
Whether it’s saving money or pushing back from the table, the concept of not taking or using as much as possible has merit. “Don’t pray to win the lottery, but for the self-control to save enough to make your own fortune,” Pilzer says. “Put the fork down before you feel full and, in prayer, thank God for the self-control to not overeat. Religion grew because it helped people – make a difference in people’s lives – right then,” Pilzer says. And the wisdom of self-control and faith still has the ability to improve lives today.

Eating for Better Health
Self-control is an important part of health and wealth. It allows us to enjoy abundance today and a better life in the future. Paul Zane Pilzer offers a few suggestions for living healthier, starting now.

Before you order the next course, eat half of what’s on your plate. Put your fork down and wait for a few minutes. Not only will you spend and eat less, but by slowing the pace of your meal you’ll give your body time to register the food you’ve eaten. Remember, it takes 20 minutes for your brain to get the signal from your stomach that it’s full. Forgo that overstuffed feeling by eating slowly and eating less. In restaurants, don’t even order an entree until you’ve eaten your appetizer.

We’re often told to eat half our meal in a restaurant and take the other half home. Pilzer advises to leave the excess there. Restaurant food typically isn’t healthy in the first place, and when you take it home you’ll be tempted to eat it at the wrong time – late at night in front of the television.

The Garden of Eden had every type of fruit and vegetable available and gave Adam and Eve all the nutrients and vitamins they needed. Give your body what it needs by eating a variety of fresh fruits and vegetables and avoid all heavily processed foods. And because few people eat enough produce, Pilzer recommends taking a supplement to ensure your body gets the necessary vitamins and minerals God prescribed for us.

Drink lots of water, but not at meals. Your body needs water to function properly, but drinking during meals can dilute the chemicals in your stomach that are necessary for proper digestion. When the digestion process is watered down, the body can’t efficiently capture the nutrients and protein from the food you’ve eaten.