Home » Media » Articles » The Next Millionaires 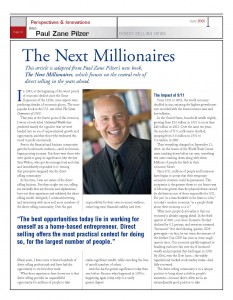 This article is adapted from Paul Zane Pilzer’s new book, The Next Millionaires, which focuses on the central role of direct selling in the years ahead.

That year, at the lowest point of this recession, I wrote a book titled Unlimited Wealth that predicted exactly the opposite: that we were headed into an era of unprecedented growth and opportunity, and that those who embraced this stood to profit enormously.

Few in the financial and business community gave the book much credence—until its forecasts began proving accurate. But there were those who were quick to grasp its significance, like the late Sam Walton, who got the message loud and clear and immediately responded to it. Among that perceptive vanguard was the direct selling community.

What these experiences have shown me is that direct selling provides an unparalleled opportunity for millions of people to take responsibility for their own economic wellness, create long-term financial stability and even realize significant wealth, while enriching the lives of untold numbers of others.
And this has far greater significance today than ever before. Because what happened in 1990 is happening again today-only to a vastly greater degree!

From 1991 to 2001, the world economy doubled in size, enjoying the highest growth rates ever recorded with the lowest interest rates and low inflation.

Then everything changed on September 11, 2001. As the towers of the World Trade Center came crashing down before our eyes, something
else came crashing down along with them. Millions of people lost faith in their economic future.

Since 9/11, millions of people and businesses have begun to accept that their temporary economic situation could be permanent. This acceptance is the greatest threat to our future way of life-even greater than the physical threat caused by the heinous acts of those responsible for 9/11.
For just “as a man thinketh in his heart so is he,” in today’s modern economy, “as a people think about their economy so is it.”

What most people don’t realize is that our economy is already surging ahead. In the third quarter of 2001, our Gross Domestic Product declined by 0.2 percent, and everyone screamed “Recession!” But the following quarter, GDP grew again—in fact, by ten times the amount of the decline! Our GDP has risen in every single quarter since. Our economy quickly regained its headlong rush into this new era of increased wealth and prosperity that had begun in 1990.

The direct selling community is in a unique position to bring about a shift in people’s awareness—because direct sellers are in an extraordinarily good position to take advantage of the next great boom which we have already entered.

After the crash of 2001, many people felt they missed their chance to be part of the boom of the 1990s. Yet, in the four years following 9/11, U.S. household wealth has increased by an incredible $8 trillion to $48 trillion—an additional 20 percent! As of this writing, census figures are not yet compiled to verify this figure, but I would project conservatively that in the same period, we added at least another one million new millionaires.

And that millionaire population explosion is still happening.

Today, the U.S. and the world economy look almost identical to how they looked in 1991, except that there are more opportunities for entrepreneurs due to recent changes in taxation and technology. Based on this history and current conditions, I forecast that U.S. household wealth will again double to $100 trillion by 2016—and that over the same ten years, the exploding U.S. economy will create at least ten million new millionaires.

For those of you in the direct selling industry, this is incredibly good news. Why? Because a significant, good number of those new ten million millionaires are the people who are entering your businesses at this very moment.

Direct Selling Will Create Many of the Next Ten Million Millionaires

Today, the direct selling industry is poised to become the distribution method of choice for all new products and services. This is true for a host
of reasons, many of which I explain in my book, The Next Millionaires. Here are just three of those factors:

In the boom of the 1990s, many fortunes were made in distribution: the Wal-Marts, Targets and Costcos. Today that opportunity has largely come and gone. The fortunes to be made in the years ahead will be predominately not in physical distribution, but in intellectual distribution: educating consumers about products and services that will improve their lives—but that they don’t yet know exist.

This is the #1 business opportunity for those who want to create new wealth. It is where a great number of the next millionaires are coming from. And the single most effective medium we have today for fulfilling that vital need is the person-to-person methodology of direct selling.

Direct selling is the perfect intellectual distribution business for today’s and tomorrow’s economy.

Age of The Entrepreneur

In the past, it was risky going into business for yourself; corporate employees had better pension and health benefits. Not any more. Recent changes in tax law have leveled the playing field—if anything, actually tilting it toward the individual entrepreneur! Congress has responded to a shift in values: people today want to work from home. Now, they can.

The best opportunities today lie in working for oneself as a home-based entrepreneur. Direct selling offers the most practical context for doing so, for the largest number of people.

The Democratization of Higher Values

In the new economy, the sheer quantity of compensation is no longer enough. People today also demand a better quality of compensation. We don’t simply want money, we want lifestyle. Today’s workers understand that it doesn’t matter how much money you earn if you never get to see your spouse or children, or if you sacrifice your health for your work.

This is a demand that didn’t exist in the past. During the Industrial Age, the question “Are you truly happy with your life?” would have been greeted by most as self-indulgent nonsense. “Happy?! What a question! I’m making
money and surviving.”

Today we want more. Our economy and living standards have grown to the point where we not only expect to make a living, we also expect to have the best possible experience living that life. We don’t want to have to sacrifice family for work, or vice versa.

The typical direct seller’s benefit statement—“You work when you want, how you want, and with whom you want”—combined with the very real value of a business based on helping others succeed, creates a uniquely attractive package to the twenty-first century business person. And I see a more seamless weaving together of work and family in direct selling than in any other sector of the economy.

When you go out into the world and successfully earn money, you are helping other people, adding value to society, and contributing to the betterment of the world. That, to me, is serving God: doing the best job you can at serving more of God’s children—other people. I know of no business that exemplifies this principle as well as direct selling.

Direct selling offers vast numbers a better, more satisfying quality of life than any other profession.

Of all the entrepreneurial opportunities available today, direct selling is now emerging as one of the most important. Direct selling companies are in alignment with today’s most vital economic trends, and because of this, they are perfectly positioned to create many of the decade’s next ten million millionaires.

I believe this is the single most important message you can be promoting to the public at large today.