Sign up for Paul's blog!
Other People’s Money
By Paul Zane Pilzer 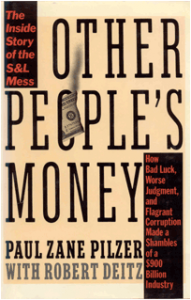 In their hard-hitting, credible expose of the government and private mismanagement and fraud that ushered in the national S&L disaster in the mid-’80s, real estate developer and New York University School of Business professor Pilzer and Deitz, business editor of the Dallas Times Herald , address the damage this calamity has done to the trust Americans place in financial institutions and the merit of saving money. First offering a concise history of the savings industry in the U.S., the authors go on to deplore its deregulation in the 1970s and ’80s, arguing that this led to a virtually unlimited flow of brokered funds and risky investments by incompetents and crooks. Accusing the Federal Home Loan Bank Board of an extensive cover-up of such shenanigans, Pilzer and Deitz sensibly call for reform of the savings deposit system, repayment of stolen savings to investors and incentives to restore our confidence in the virtue of thrift. From Publishers Weekly Copyright 1989 Reed Business Information, Inc.

Saving money, wrote Charles Dickens in 1864, is a practice that encourages its own success.  “If you begin [saving] and go on with it for a little time, you come to have a sort of passion for it.”

But saving money is more than a commendable habit.  It is a personal act of faith, a form of self-denial that expresses confidence in the future.  A person who denies current comfort and pleasure for future happiness is demonstrating his belief in a destiny that can be controlled and improved.  It is one thing to pray in church for God’s favor.  It is an altogether different proposition to spare today on food, clothing, and shelter in order to have a better life tomorrow.

The savings of immigrants seeking to improve their lives were responsible not only for the growth of the U.S. savings and loan industry but for much of the growth of the United States itself.  Looking back, their willingness to save may seem to have been only prudent.  But consider what courage the act of saving required of those immigrants.  The poor, shabby newcomer to nineteenth-century America, perhaps a Jewish peddler from Eastern Europe or a peasant farmer from Armenia, to deprive his family of often basic necessities in order to salt away a few dollars in the care of a nameless banker operating from a storefront along a crowded, noisy street in Manhattan or Boston or Philadelphia.  That immigrant, usually a victim of religious or political or economic repression, justifiably had no faith in paper money or coins not in his possession.  Yet the immigrant saver still had sufficient faith in the American dream, and in the durability of the American political and financial systems to bet that those few pennies and rare dollars would not only be secure, but be available when he needed them for medicine or his child’s education or perhaps even the down payment on a modest frame house.

That’s what makes the wreckage of the U.S. savings and loan business such a lamentable irony.  For the fact is that the origins and rich heritage of the thrift industry are anchored in noble purpose–to provide common men and women with a way of accumulating modest wealth to improve their lives and the futures of their children.  Indeed, they bear an indelible religious imprint, rooted in the philanthropic funds accumulated and disbursed by the church in the Middle Ages and the burial societies of biblical times.

The origins of the modern savings and loan industry in the United States are found in the “friendly” savings societies that arose in England and Scotland in the early nineteenth century.  These societies were voluntary savings associations sponsored by small parish churches or wealthy, socially conscious landed gentrymen.  Their purpose was to help the poor cottagers of the time put away…